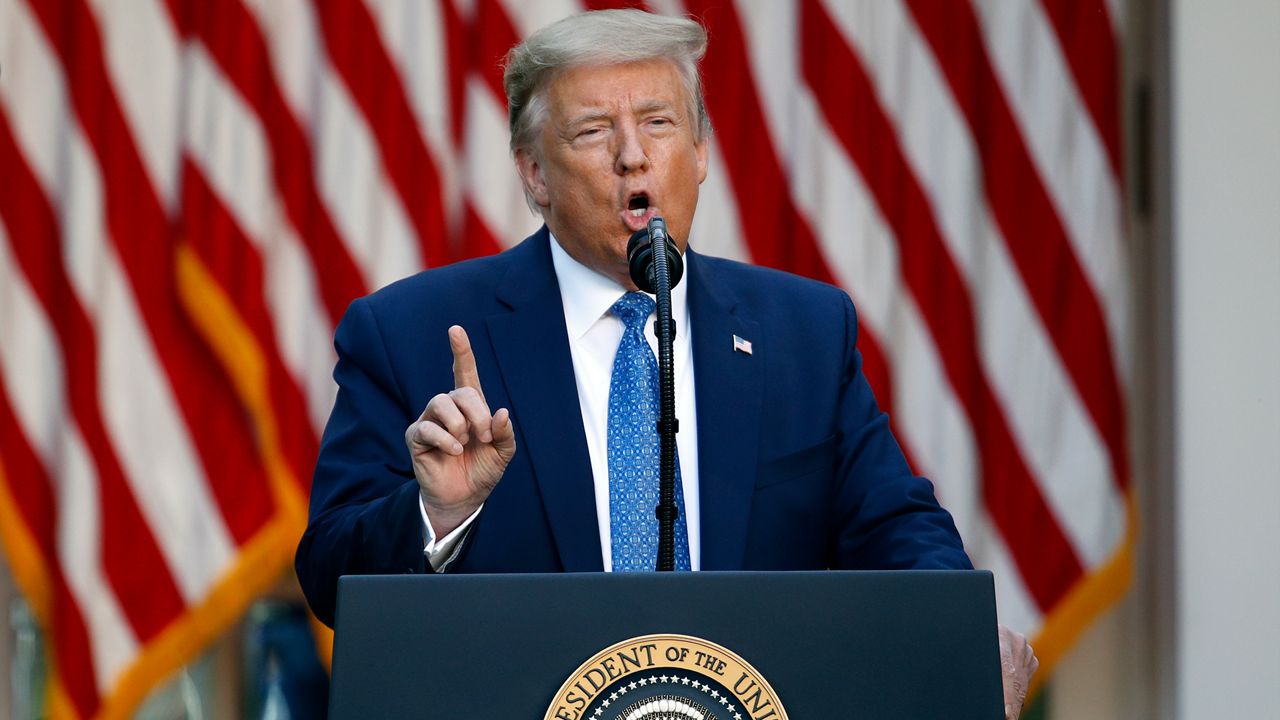 MINNEAPOLIS (AP) — President Donald Trump threatened on Monday to deploy the United States military unless states quickly halted the violent protests that have convulsed cities from coast to coast, hours after George Floyd’s brother pleaded for peace, saying destruction is “not going to bring my brother back at all.”

The competing messages — one conciliatory, one bellicose — came as the U.S. braced for another round of violence at a time when the country is already buckling because of the coronavirus outbreak and the Depression-level unemployment it has caused.

Trump said he was recommending that governors throughout the country deploy the National Guard in sufficient numbers to “dominate the streets.” If governors fail to take action, Trump said, he will deploy the United States military and “quickly solve the problem for them.”

Trump spoke in the Rose Garden minutes after police fired tear gas to disperse hundreds of peaceful, chanting protesters gathered in the park across the street from the White House.

The National Guard presence in Washington was much more overt Monday than the day before. Beige hummers blocked several downtown intersections.

But in Minneapolis, Floyd’s brother, Terrence, made an emotional plea for peace at the site where Floyd was pinned to the pavement by an officer who put his knee on the handcuffed black man's neck until he stopped breathing.

The crowd chanted, “What’s his name? George Floyd!” and “One down, three to go!” in reference to the four officers involved in Floyd's arrest. Officer Derek Chauvin has been charged with murder, but protesters are demanding that his colleagues be prosecuted, too. All four were fired.

The gathering was part rally and part impromptu eulogy as Floyd urged people to stop the violence and use their power at the ballot box.

“If I’m not over here messing up my community, then what are you all doing?” he said. “You all are doing nothing. Because that’s not going to bring my brother back at all.”

The country has been beset by angry demonstrations for the past week in some of the most widespread racial unrest in the U.S. since the 1960s. Spurred in part by Floyd's death, protesters have taken to the streets to decry the killings of black people by police.

On Monday, police fired tear gas at hundreds of protesters who spilled onto an interstate highway in the heart of Philadelphia just before a 6 p.m. curfew took effect.

While most of the demonstrations have been peaceful, others have descended into violence, leaving neighborhoods in shambles, stores ransacked, windows broken and cars burned, despite curfews around the country and the deployment of thousands of National Guard members in at least 15 states.

Earlier Monday, Trump told the nation’s governors in a video conference that they they “look like fools” for not deploying even more National Guard troops. “Most of you are weak,” he said.

Washington Gov. Jay Inslee, a Democrat, dismissed Trump's comments as the “rantings of an insecure man trying to look strong after building his entire political career on racism.”

Former Vice President Joe Biden, the Democratic presidential candidate, vowed to address institutional racism in his first 100 days in office. He met in person with black leaders in Delaware and also held a virtual meeting with big-city mayors.

Biden said hate emerges “when you have somebody in power who breathes oxygen into the hate.”

Meanwhile, an autopsy commissioned for Floyd’s family found that he died of asphyxiation from neck and back compression, the family’s attorneys said.

That distinguishes it from the official autopsy, which said he died from the effects of being restrained along with underlying health problems and potential intoxicants in his system. The official autopsy found nothing “to support a diagnosis of traumatic asphyxia or strangulation.”

The second autopsy was done by a doctor who also examined the body of Eric Garner, a New York man who died in an officer’s chokehold six years ago.

Authorities in many cities have blamed the violence on outside agitators, though have provided little evidence to back that up.

But on Monday, federal authorities arrested a 28-year-old Illinois man, Matthew Lee Rupert, saying he had posted self-recorded video on his Facebook page last week that showed him in Minneapolis handing out explosive devices and encouraging people to throw them at law enforcement officers. The video also showed him attempting to light a business on fire, and looting, according to an FBI affidivit. Early Sunday, he posted more videos of himself in and around Chicago, saying “let’s start a riot.”

He was arrested in Chicago for violating the city's curfew.

As they girded for more violence, Washington and New York joined other cities in announcing curfews. The move followed a chaotic Sunday night in New York, where groups broke into Chanel, Prada and Rolex boutiques and electronics stores.

Hours before Washington's 7 p.m. curfew was to go into effect, nearly a dozen National Guard vehicles rumbled through the White House grounds and exited opposite Lafayette Park, where crowds had gathered for another night of protests. On Sunday, police fired tear gas and stun grenades into a crowd of protesters in the park. They scattered to light fires in nearby streets.

At least 4,400 people nationwide have been arrested over the past week for such offenses as stealing, blocking highways and breaking curfew, according to a count by The Associated Press.

Police officers and National Guard soldiers enforcing a curfew in Louisville, Kentucky, killed a man early Monday when they returned fire after someone in a large group shot at them, police said. In Indianapolis, two people were reported dead in bursts of downtown violence over the weekend, adding to deaths recorded in Detroit and Minneapolis.

While police in places tried to ease tensions by kneeling or marching in solidarity with the demonstrators, officers around the country were accused of treating protesters with the same kind of heavy-handed tactics that contributed to the unrest in the first place.

In Fort Lauderdale, Florida, an officer was suspended for pushing a kneeling woman to the ground during a protest. In Atlanta, two officers were fired after bashing in the window of a car and using a stun gun on the occupants. In Los Angeles, a police SUV accelerated into several protesters, knocking two people to the ground.

In New York, the police commissioner said about six incidents were being investigated by the department’s internal affairs bureau, including a weekend confrontation in Brooklyn in which two police vehicles appeared to plow through a group of protesters. In another incident, an officer pointed a gun at protesters, drawing condemnation from the mayor.

Sedensky reported from Philadelphia. Associated Press journalists across the U.S. contributed to this report.